If you do not have bibs, or if your bibs were printed to match the GoChip numbering scheme, then you can use the Assign Racer Numbers tool on the start list.  Enter the code of the first chip you have in the Assign Numbers Starting From field.  If you enter a valid GoChip code, you’ll see a Chip Racks field appear.  Enter the letters of the racks that you have, (for example, if you have a rack numbered A1-A00 and C1-C00, you would enter “A,C”) and click the Assign Bib Numbers button. 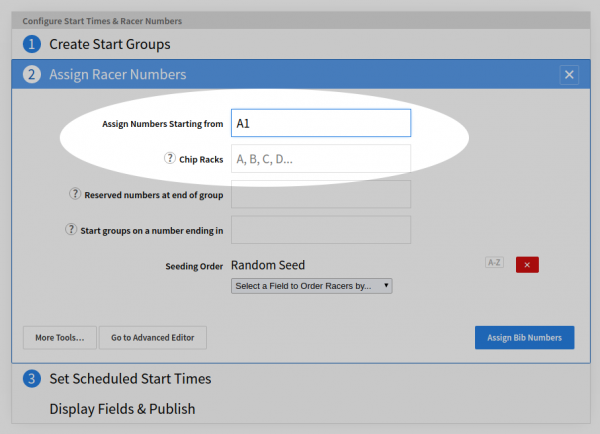 In most cases, you’re going to have bibs or number plates for your racers that have different numbers on them to the GoChip Codes.  In this case, find the Assign GoChips option under the More Tools… menu: 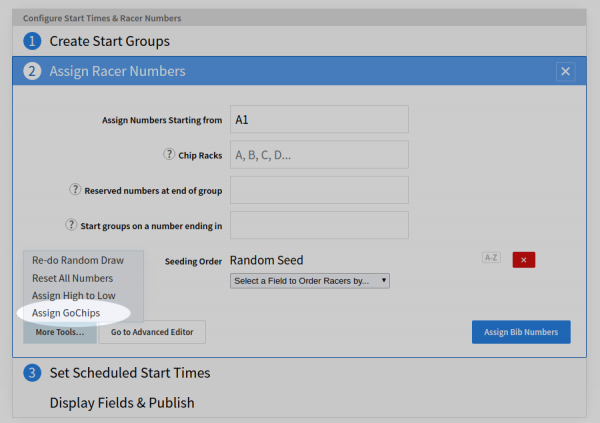 On the Assign GoChips screen, enter the letters of the racks that you have, (for example, if you have a rack numbered A1-A00 and C1-C00, you would enter “A,C”) and click the Assign Bib Numbers button. 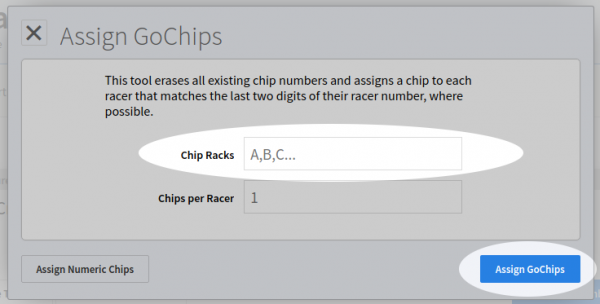 Assigning Multiple Chips to a Racer

In some race formats, you might need to assign more than one chip to a racer.  For example in elite races a racer will get a chip for each ankle, or in relays where each team is registered as a single racer each team member might need a different chip.  Simply change the Chips per Racer field to the number of chips you want to assign, and the tool will assign the racer one chip from each rack.  For example, if we have racks A and C, racer 19 will get Chip A19 and C19. 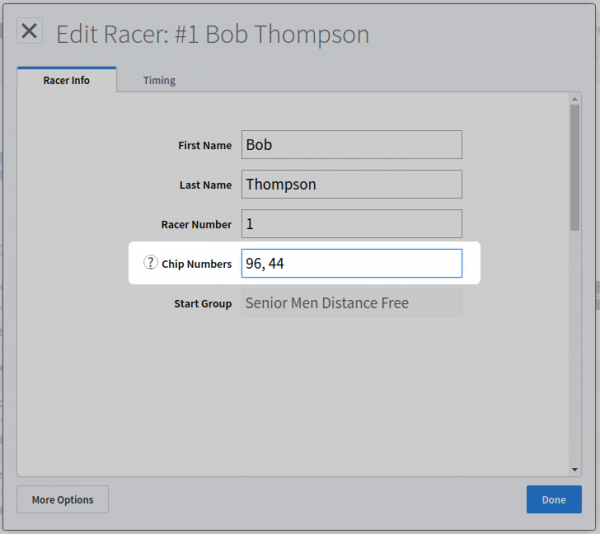 You can always edit the racer’s chip number by clicking on the racer in either the start list, results, or the racers page and editing the Chip Number field.  If you want to assign multiple chips to a single racer, enter each chip number separated by a comma.

If you change the racer’s timing chip after the race has started and some times have already been recorded for that racer, changing the timing chip will not automatically affect the times that have already been recorded for them.  This may be what you want (for example, if the racer loses their timing chip after the first lap and is given a new one, entering a new chip number will not clear their lap 1 time) or it may not be what you want – if the wrong chip number was entered and you are just correcting it, you will want to clear and re-process the racer’s times to pick up the change to the chip number.

Assigning other Types of Chips

If you are using passive chips, or GoChips from before we started using the letter-number scheme you can use the old chip assignment tool by clicking the Assign Numeric Chips button on the Assign GoChips screen: 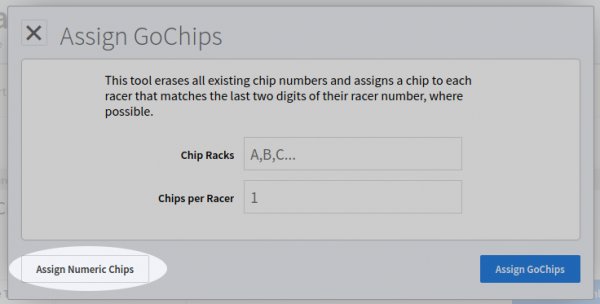 Enter the start and the end of the range of chips that you have, and then click the Assign Chips button.  For each chip, we will first check to see if it matches an existing racer number.  If it does, we will assign it to that racer.  Then we’ll take all the remaining chips in your range and match the lowest unassigned chip number with the lowest-numbered racer that does not have a chip assigned yet, until all the chips have been assigned. 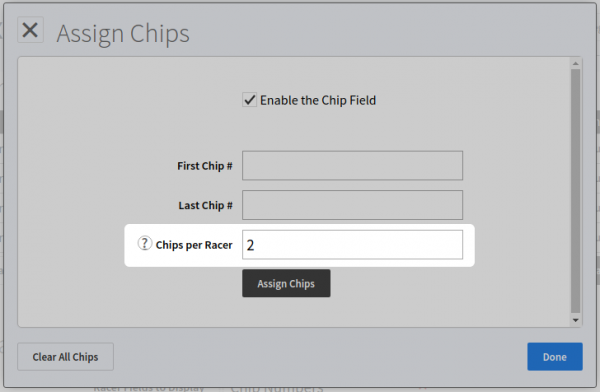 On the Assign Chips screen you will see the Chips per Racer option.  You can use this to assign more than one chip to a racer, for example if the racer is actually a relay team or if you are putting a chip on each ankle.  The chip assignment logic for this function follows the same process outlined above, where any chips in your range that match an existing racer number are assigned to that racer, and then the remaining chips are assigned sequentially.