As an example of the situation that minimum splits protect against: You’re timing a three-lap race, and you have a timing point collecting mid-lap splits.  A racer starts the race, gets a time recorded at the mid-lap split point, completes their first lap, and then stops for a drink of water right after the lap point.  While they are stopped, they walk back a couple steps to cheer on a friend and crosses the lap point again.  This second time counts as their second lap, giving them an incredibly short lap two time, and skips over the mid-lap split point (the system assumes that if they receive another lap time, they must have just missed the mid-lap split).  If we set minimum split times between our timing points, the time recorded when the racer walks back over the timing point will be ignored if it will produce a lap quicker than the total minimum split time for the lap. 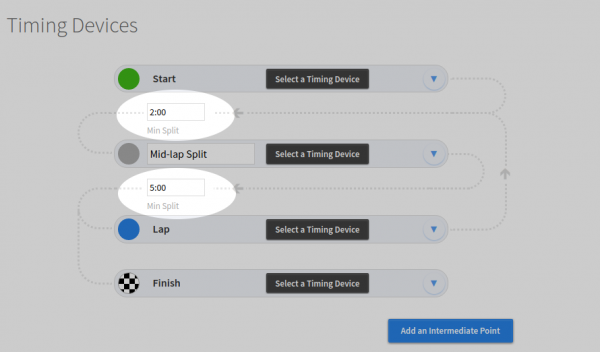 If a racer does not have a time recorded at the mid-lap split timing point, the min split for the first segment of the course still counts – each lap must be at least 2:00+5:00 long.

If you have started your race without min splits and are getting lap times assigned that are too short, you can set minumum split times after the race has started and clear the times and re-process for racers that have had extra times recorded.  See the help page here for more information about correcting racer times.