Select the “Time Limit” template on the Create a Race window: 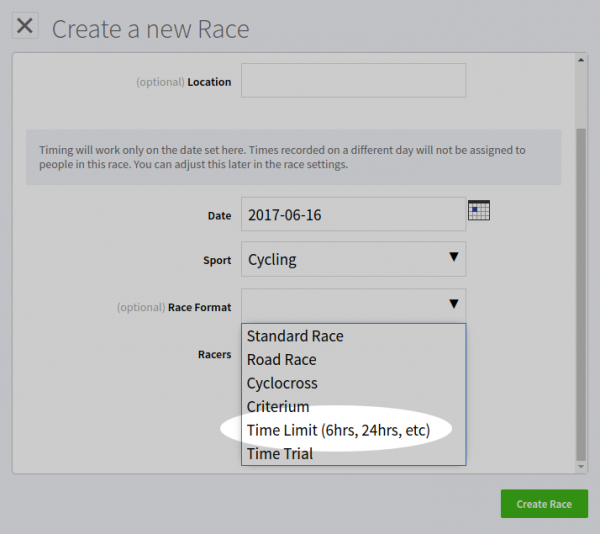 And then select the “Upload Racers from a CSV” option.  The full help page for uploading racers from CSV can be found here.

The CSV file should have a column called “Team Name” to identify the relay teams, a column called “Race Type” to identify whether racers are in the 24hour or 8hour race.  Each row should be an individual racer, and all the rows representing members of a relay team must have the exact same value in the “team name” column.  Racers who are not part of a relay team should have the “team name” column blank.

Under the “advanced settings” section on the race settings page, turn on the Enable Relay Team Grouping option and set the Team Field to be “team name”.  Ordering is not important if the racer numbers are already assigned.

On the start list page, select the All Racers Start in One Group option. 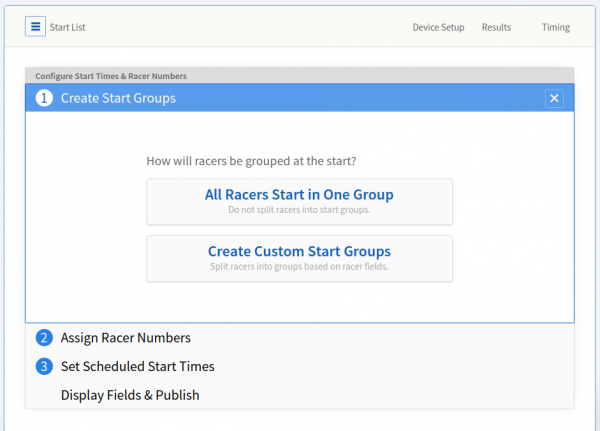 Racer numbers were already assigned in the CSV file that was used to create the race, so do not do anything in the Assign Racer Numbers step.  Setting a scheduled start time is probably unnecessary, we will record an actual start time for all racers.

When racers are uploaded from CSV, we don’t automatically know which fields racers can be grouped on, and which fields contain data like names that can’t be used to create racer groups.  In order to group racers into courses and categories on results, fields need to be marked as Option Fields.

From the race overview, navigate to Racer Reports and Tools:

Then select Manage Data Fields… which takes you to a list of all the fields in your race, which should match the list of columns in the CSV file you started with.  For the “race type” field and any other fields that you might want to group racers on like category, select the three-dot menu beside the field name and change it from “text” to “option”:

In a time-limit format race, the course groups are used to specify an end time for the group of racers.  On the Device Setup page, select the Split Racers into Course Groups option, and then select the “race type” field in the Add Racer Group Field menu: 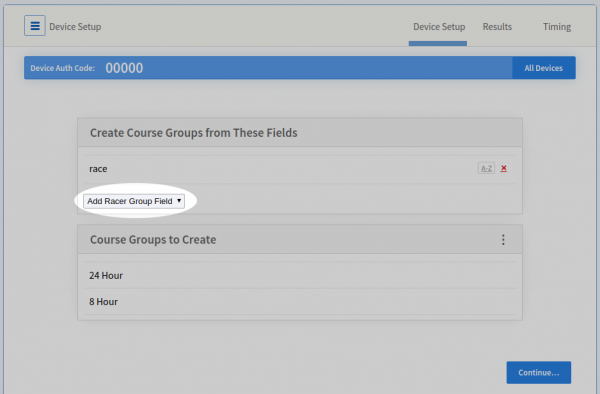 And then after clicking continue, you will be prompted to set an end time for each course group:

After all the racers have started, we’ll change those devices around so that the chip timer at the finish is a Timing Device, the chip timer at precall is a Precall Device, and we’ll remove the summit from the start and add it to the lap as well to act as our On-Course Device for the remainder of the race. 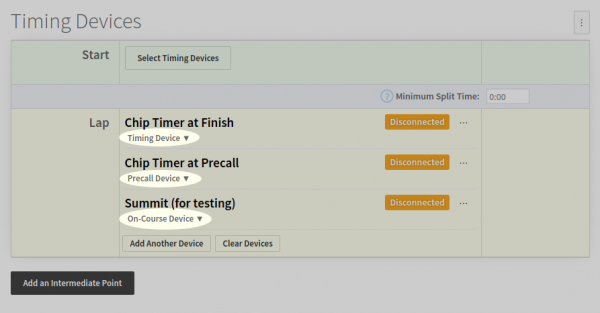 Additionally, you can change the on-course status at any time by clicking Set on the racer, if the racer is a team: 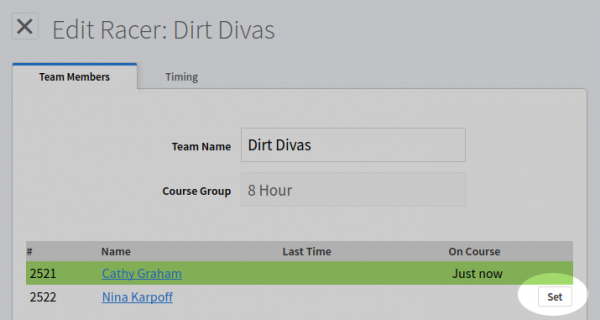 or Mark as On Course in the more options menu for a solo racer. 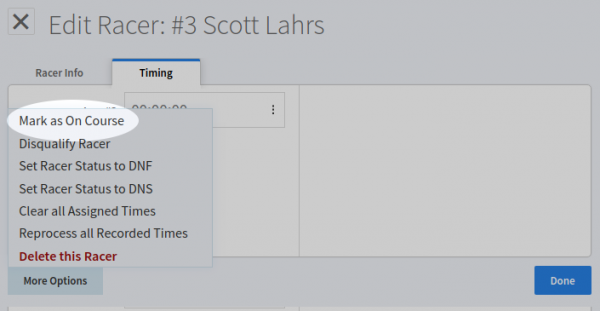 To view the list of racers that are currently on course, find the lap/finish timing point under the timing tab:

Where you’ll see the On Course and Not On Course tabs:

Hopefully, the chips pick up times for everybody and we don’t have to correct anything during the race, but that’s probably unrealistic.  For solo racers, this is easy – you can just click on the racer and enter the correct time in the appropriate spot.  For team racers, we need to control which team member each time is associated with. 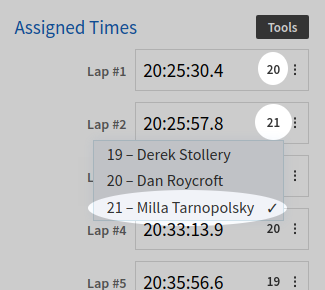 Immediately beside each time, you’ll see the racer number that the time was recorded on.  You can click that number to change which team member the time is associated with.  All times are shown as 24-hour time-of-day in this screen.

In the three-dot menu beside the racer number, there’s the useful-sounding options “shift times up” and “shift time down”.  Do not use those tools on teams, they only work on solo racers right now.

We’ll probably want a few different types of results, for overall / category / subcategory / etc, and we can decide that at the race.  One thing that we’ll do a bit different this race is to enable Racer Pages 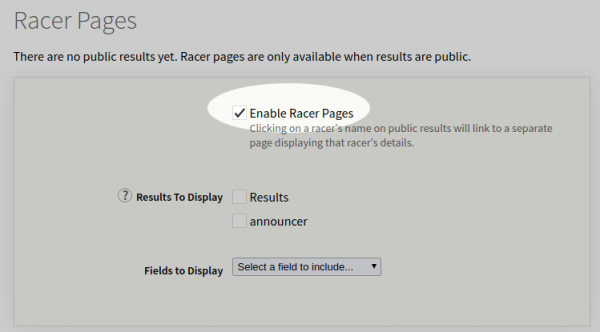 On the public results, we’ll only display the total time and the lap count to avoid the results getting way too wide, and people will be able to click a racer or team’s name to view a full list of all the laps completed, which looks like this: 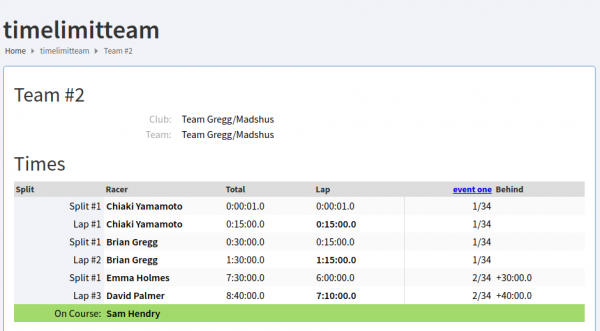 On the announcer screen, racers who have been read by the precall and have not crossed the timing point yet will display a lap count only (no time) on the right column.  When they cross the line, their time will populate. 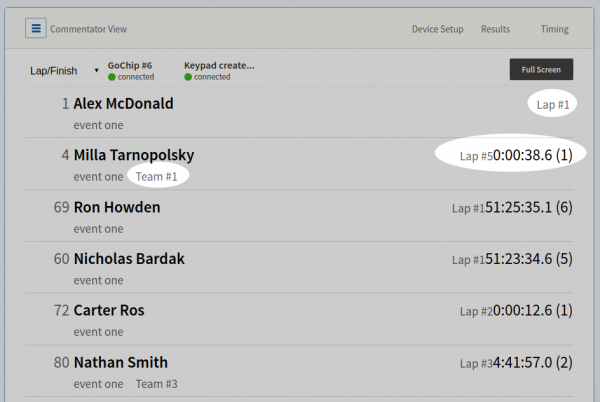 The full help page for the announcer system is here.